Melissa Benkert is the Director for International Cooperation (IC) in the Office of the Under Secretary of Defense for Acquisition and Sustainment (A&S), Assistant Secretary of Defense Industrial Base Policy ASD (IBP). Ms. Benkert is responsible for leading, developing and implementing international armaments cooperation policy within the Department of Defense (DoD) in coordination with U.S. Government agencies, foreign governments and defense industry. This activity includes cooperation with allies and partners on research, development, production and support of weapons systems and related equipment. Ms. Benkert serves as the A&S lead for technology transfer and is a member of the National Disclosure Policy Committee.

Previously, she served as the Director for Planning, Programs and Analysis (PPA) within IC. PPA is the Department of Defense focal point for the authorization of international agreements for research, development, production, acquisition, and logistics support. Seeking to foster greater international cooperation, PPA administers the Coalition Warfare Program and the Defense Exportability Features Program.

Prior to joining PPA, Ms. Benkert served as the Associate Director for International and Interagency Programs in the Office of the Under Secretary of Defense (Comptroller). Where she managed a complex set of authorities and appropriations associated with the Department’s international support programs, including the Iraq and Afghan Security Forces Funds.

From 2000-2010, Ms. Benkert served as a research analyst at the Center for Naval Analyses (CNA). She conducted research and analysis on issues ranging from DoD’s Partnership for Peace programs to carrier air wing support for Operations Iraqi Freedom and Enduring Freedom and served as CNA’s deployed representative to the Commander, Enterprise Carrier Strike Group. Ms. Benkert served as the Special Assistant and Advisor to the Assistant Secretary of Defense for Global Security Affairs and as the Director for Ministerial Development in the Defense Reconstruction Support Office.

Ms. Benkert’s other experience includes work as an arms control analyst supporting program offices at the Departments of Defense and Energy and served as the Atlantic Council’s Director for Planning, and as the Deputy Director for Civil-Military Relations.

Ms. Benkert was promoted to the Senior Executive Service in 2012. She is a recipient of the Secretary of Defense Medal for Outstanding Public Service. Ms. Benkert earned an M.A. in Security Policy Studies from the George Washington University and received her B.A. in Political Science and History from Creighton University. 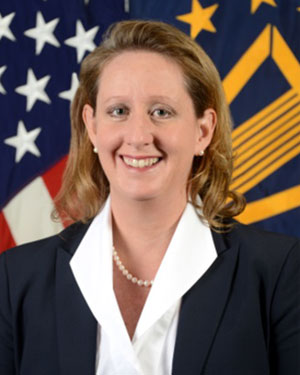