Performing the Duties of Assistant Secretary of Defense for Acquisition 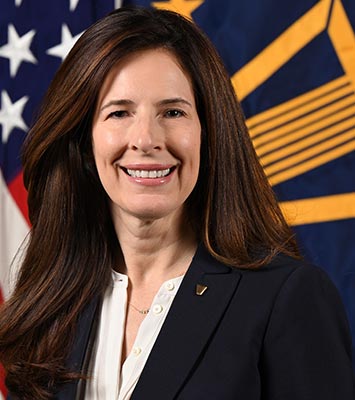 Ms. Skeen most recently served as Executive Director for the F-35 Lightning II Joint Program Office. She was responsible for acquiring and delivering DoD’s affordable and sustainable fifth-generation strike aircraft, as well as the F-35 Global Sustainment Strategy for three U.S. Services and seven partner countries.

Prior to that position, she served as the Program Executive Officer of the Army Rapid Capabilities Office. In this position, Ms. Skeen was responsible for expediting the fielding of critical combat capabilities to the warfighter and enhancing materiel responses to meet Combatant Commanders’ needs. She led the mission to rapidly develop, acquire, integrate and equip selected capabilities; implement streamlined acquisition methods, processes and techniques; and act as an agent of change by challenging traditional approaches.

In earlier assignments, Ms. Skeen served as Deputy Director of Test and Evaluation, Headquarters U.S. Air Force, where she was responsible for policy, resources and oversight of developmental and operational testing, and the Air Force head of foreign materiel acquisition and exploitation. She assisted the Director in overseeing a $4 billion Air Force test infrastructure and the programming and execution of the Air Force test portfolio with an annual budget of $1.9 billion.

A native of Kent, Ohio, Ms. Skeen was commissioned in the U.S. Navy in 1990 following graduation from Purdue University where she earned her Bachelor of Science degree in Aeronautical and Astronautical Engineering. In the Navy, she served as a Technical Instructor and Assistant Director at the Nuclear Power Training Command and also received her Master of Science in Mechanical Engineering from the University of Central Florida. After leaving the Navy, Ms. Skeen held numerous private sector positions in engineering and flight test of air, space, and ground weapons systems.