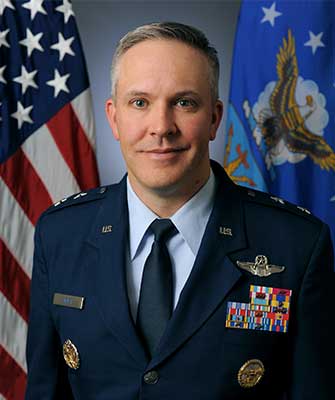 Brig Gen David Abba is the Director of Special Programs and the Director of the Department of Defense Special Access Program Central Office (DoD SAPCO), the Pentagon, Arlington, Virginia. He serves as the principal staff assistant and advisor to the Secretary of Defense under the authority, direction, and control of the Deputy Secretary of Defense for all programs protected under special access controls in order to acquire and deploy operational and intelligence capabilities to warfighters worldwide. Additionally, Brig Gen Abba chairs the Low Observable/Counter Low Observable Tri-Service Committee.

Brig Gen Abba earned his commission through the United States Air Force Academy in 1995 with a Bachelor of Science in Human Factors Engineering. He has held a variety of flying assignments at the squadron, group and wing level, including serving as the weapons officer for the 58th Fighter Squadron at Eglin Air Force Base, Florida; director of operations for the 27th Fighter Squadron and commander of the 94th Fighter Squadron, both at Langley AFB, Virginia; commander of the 3rd Operations Group at Joint Base Elmendorf-Richardson, Alaska; and commander of the 53rd Wing, Eglin Air Force Base, Florida. The general’s staff assignments include Airpower Strategist in Project CHECKMATE, Assistant Executive Officer to the Air Force Chief of Staff and Senior Air Force Strategy Advisor in the Office of the Secretary of Defense for Policy. Prior to his current assignment, Brig Gen Abba was the Director of the F-35 Integration Office, Headquarters United States Air Force, the Pentagon, Arling ton, Virginia.