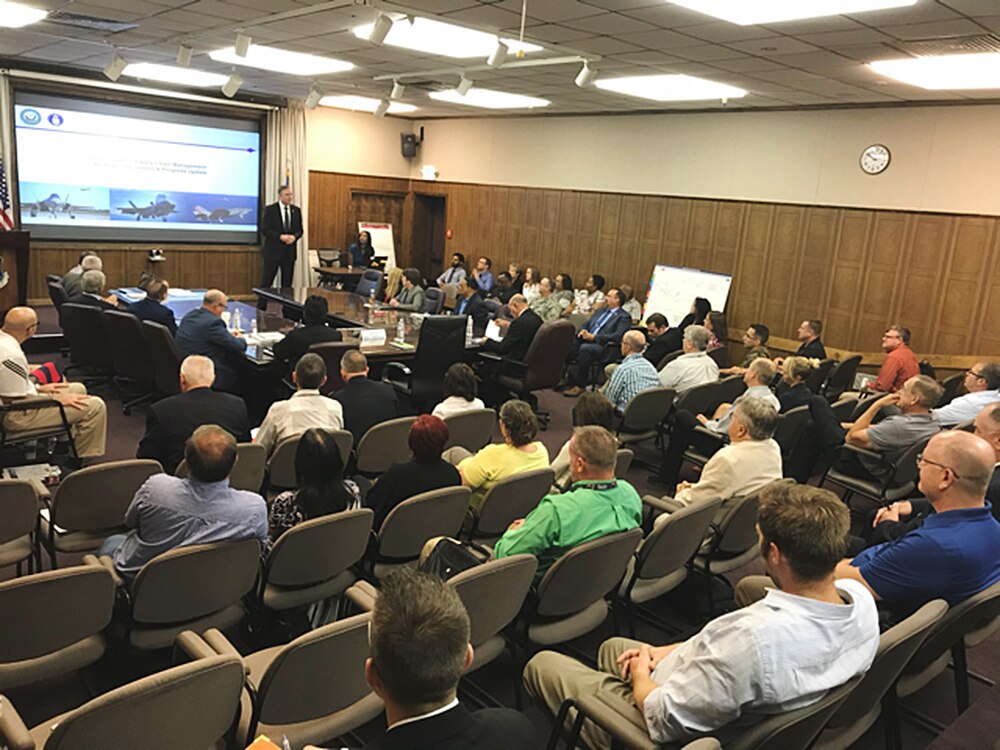 According to a separate GAO report, the F-35 fighter jet is the defense department’s largest and most expensive weapons program, with a projected life-cycle cost of more than $1 trillion over a 60-year lifecycle span. “In order to effectively integrate and sustain the F-35 in the joint force, the military departments must have more direct ownership of the F-35 program and leverage organic capabilities, processes and infrastructure,” said Ellen Lord, Undersecretary of Defense for Acquisitions and Sustainment wrote in a letter to Congress in March 2018 in response to the GAO reports and to the seemingly unsurmountable sustainment costs.

Lord and other OSD leadership, like Robert McMahon, Assistant Secretary of Defense for Logistics Materiel and Readiness, directed DLA to start accelerating the cataloging of the F-35 to explore the option of organic supply support. According to Jack Courtney, F-35 IWST lead at NAVSUP WSS, there was already a body of research to draw information.

“There was a concerted effort about five years ago called the organic supply chain working group that went on for months,” said Courtney. “I think that now there is greater emphasis on this recent effort for programs like the F-35, and the work we did at the mapping event leveraged all of that great work and research that was done previously to look into an organic solution.”

According to Lord, lethality and readiness drive acquisition and sustainment reform. “We need to start thinking about sustainment more when we design systems, so that we are designing [them] to be maintainable,” she explained. “To be able to change out parts quickly, we need to make sure that we think about the costs of sustaining systems.” Lord added that 70 cents of every dollar DoD spends over the lifecycle of a program goes to sustainment. Will Roper, U.S. Air Force assistant secretary for acquisition, technology and logistics, mentioned that a lot of the sustainment challenges can be solved through software modernization. “Supply chain management happens via software,” said Roper, who intends to drive down the F-35’s sustainment costs. “Predictive maintenance could significantly drive down sustainment costs, especially if the department utilizes new technologies that help it pinpoint exactly when maintenance should be done on the jet.”

After OSD tasked DLA to accelerate the F-35 cataloging effort, and after the NAVSUP-hosted pre-provisioning conference, NAVSUP WSS pulled together to do some “homework” before heading out to Utah for the Provisioning Mapping Event. The “homework” included reading over the all the data gathered from previous working groups and looking over lessons learned from other programs’ transition records.

After a week of discussions, breakout sessions, and working group meetings, the team provided a framework for establishing an executable organic supply chain management option with a Material Support Date (MSD), potential courses of action and conditions for each, and a summary of transition tasks, risks, roles and responsibilities. According to Lt. Cmdr. Danny Ewing, NAVSUP WSS F-35 IWST, the working group – formed as a result of this mapping event – is using a phased approach to achieve its milestones.

Those milestones include establishing and validating a DLA managed set of common consumables, so long as the customers’ demand data is made available for accurate requirements forecasting. Another quick win would be exercising the flexibility of the Working Capital Fund to support a more continuous logistics support execution. “Overall, I think the mapping event was very positive,” Courtney concluded. “The group dynamics were very productive with excellent collaboration with the Air Force and DLA, and I think we have made some substantial headway in looking at an organic program support option.”