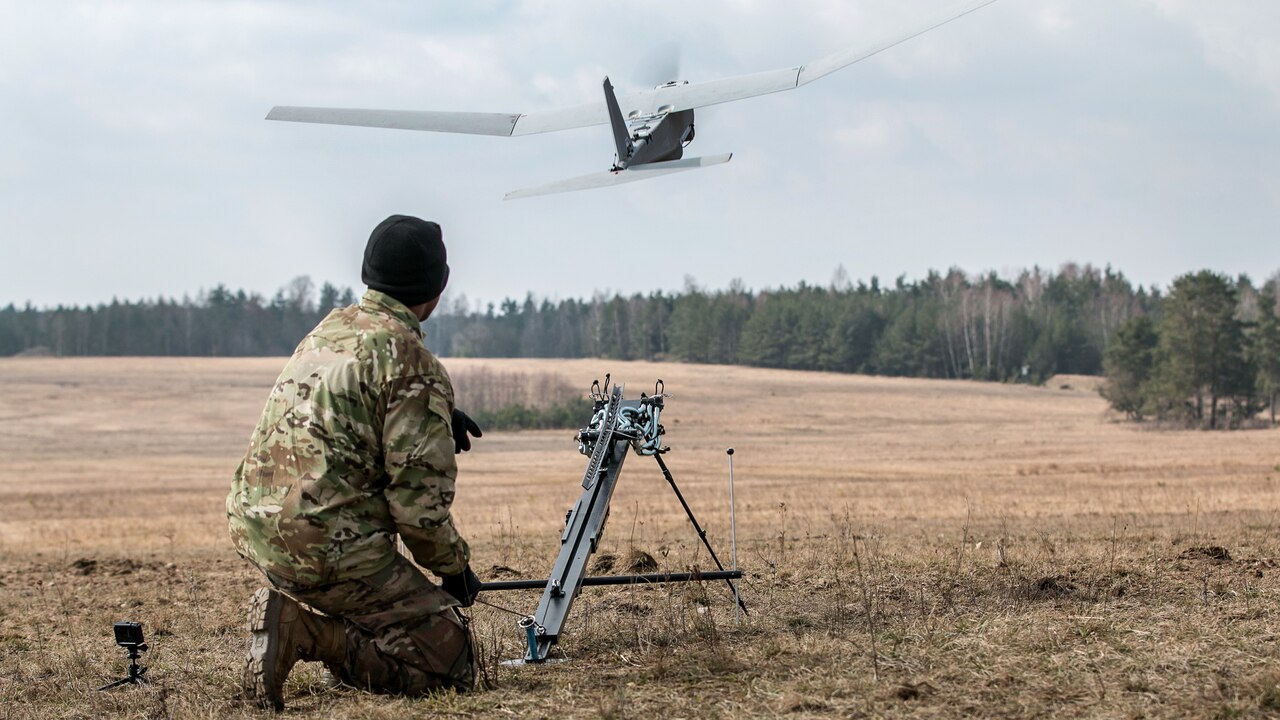 Led by a group of civilians from the U.S. Army Tank Automotive Research, Development and Engineering Center, the training brief served as a precursor to a scheduled Robotic Complex Breach Concept demonstration later this week. That demonstration will see the use of new air and ground equipment for the first time by soldiers.

The unmanned aerial capabilities on display included the Lethal Miniature Aerial Missile System, Puma and Instant Eye, which allows soldiers to evaluate and detect hazards from a safe distance.

“The aviation assets are invaluable,” said Army Staff Sgt. Brian Logan, a chemical, biological, radiological and nuclear specialist. “One of the aviation systems, the Instant Eye, can actually detect hazardous exposure such as chemical or biological threats. The best way to prevent a CBRN injury is avoidance, and that’s what these assets allow us to do -- avoid unnecessary exposure.”

Puma System
Another aerial asset, the Puma system, is a small unmanned aircraft that gives soldiers the ability to reconnoiter an area and capture photos and other mission-enhancing abilities without placing anyone in harm’s way.

“The Puma system allows soldiers to perform many forms of reconnaissance,” said Kenneth Martin, an operator of the Puma system. “Using a change-detection software, this aircraft can identify any changes made to a route or road over a period of time, to help identify possible hazards.”

In addition to aerial assets being used for reconnaissance, the LMAMS gives soldiers the capability to attack enemy targets from a safe distance that may not be in visual range.

“The LMAMS is a direct-fire missile used for neutralizing enemy targets or soft-shell vehicles,” said Beler Watts, a spokesman for the LMAMS. “This system helps our service members reach threats that the standard weapon can’t reach with a very low collateral damage footprint.”

Select service members who will be participating in the breach exercise had the opportunity to attend a week-long course to better understand the capabilities of the aviation assets prior to the demonstration.

“After attending the course and finding out exactly what these systems can do, I am impressed,” said Army Spc. Jackson Thomas, an intelligence analyst assigned to 82nd Brigade Engineer Battalion. “Having the ability to capture images of our routes and identify any disturbed land that could indicate possible hazards saves not only lives, but other assets and equipment to keep our force effective.”