How COVID-19 Prepared the Military for Future Biological Warfare 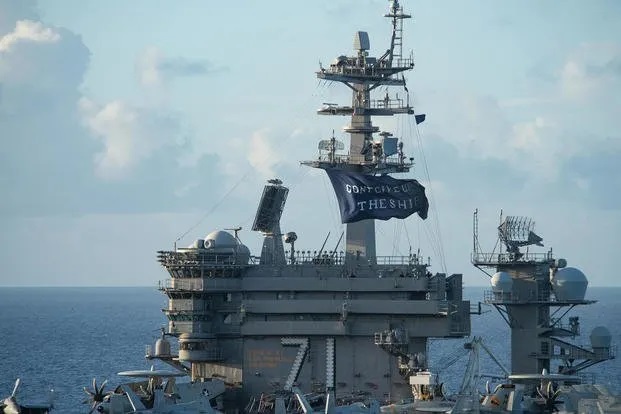 As the COVID-19 pandemic erupted last spring, entire swaths of society shut down or went remote.

But the vast majority of the military's missions, including air transportation, basic training and ships at sea, couldn't be done through Zoom calls. The services had to improvise and adapt to keep operations going while holding the disease at bay -- and they were largely successful.

In the process, leaders said, the military has relearned old skills for operating in compromised environments that could come in handy in a future conflict if chemical or biological weapons were used.

As the military concentrated on fighting violent extremists in the Middle East in recent years, chemical and biological threats weren't a pressing threat and the Defense Department largely put those activities "on a low simmer," Lt. Gen. Brian Robinson, deputy commander of Air Mobility Command, or AMC, said in an April 6 interview.

"We never stepped away from it completely," Robinson said. "But I think it's fair to say that we got maybe a little rusty."

The pandemic, he explained, is likely the first time in decades the military has faced a true challenge to how it commands and controls its forces on a global scale.

"We had to learn from that very quickly," Robinson said.

But one of the greatest crises the military faced during the pandemic -- the COVID outbreak on the aircraft carrier Theodore Roosevelt -- also could provide even more lessons for how to respond in a biological or chemical attack.

The rapid spread of the coronavirus last year led to its skipper pleading with Navy leadership for help containing it. His SOS was leaked to the media, causing a firestorm that ultimately led to both his firing and the resignation of former Navy Secretary Thomas Modly.

Lt. Cmdr. Brian Pike, now the deputy medical director in the Office of the Deputy Assistant Secretary of Defense for chemical and biological defense, said the military can learn a lot from the Roosevelt's experience.

Pike led a rapidly deployed team to the Roosevelt last March, before the COVID outbreak on the ship became known, to bolster its medical staff and help with disease surveillance. The Navy preemptively sent these disease surveillance units to several ships as the pandemic unfolded worldwide, to try to catch an outbreak early, he said.

Pike's team arrived on the carrier March 11, 2020, two days after a port visit to Vietnam that is widely suspected to have led to the outbreak. Two weeks after the ship left Vietnam, the first sailor showed up at sick call with COVID symptoms.

In an article Pike co-authored for War on the Rocks last November, he wrote that the Roosevelt's experience shows the Navy needs to consider deploying technical experts in the detection and surveillance of biological threats on its ships to catch outbreaks before they spread.

"Preparing for the future means enhancing the Navy's shipboard capabilities to detect a biological event when one occurs," Pike told Military.com via email this month. "The Navy may not be lucky enough next time to receive a warning far enough in advance of an impending threat, as in the case of COVID, to deploy assets that are not already organic to a ship."

Pike and co-author Gregory Koblentz, a biodefense expert at George Mason University in Fairfax, Virginia, wrote that improved detection capabilities should include monitoring crew health and preparing for scenarios where the first signs of a biological attack show up as symptoms in the crew. This could require the Navy to add more personnel skilled in disease surveillance or giving existing personnel specialized training in that area, they said.

"Identifying and interpreting physiological changes among a ship's crew may be the difference between success and failure in combating a future biological threat," they wrote.

As the nation started to grapple with the potential scope and length of the pandemic, former Air Force Chief of Staff Gen. Dave Goldfein drew an explicit connection between the task facing the Air Force and how it would respond to chemical and biological warfare.

"It's time to dust off those Ability to Survive and Operate [ATSO] manuals," Goldfein said in a letter to airmen last April. "Many of us grew up in the age of Apple Orchards, MOPP [Mission Oriented Protective Posture] levels, operations with [personal protective equipment] aircraft decontamination procedures, etc. While we have not required it in recent years, given our focus on the Middle East, the ability to survive and operate in a [chemical, biological, radiological, nuclear or explosive] environment is in our DNA."

Robinson, the AMC deputy commander, said that, particularly as North Korea continued to present a threat last year, the time was ripe to relearn those skills.

And, he said, AMC won't let those skills grow rusty again. AMC has ramped up its CBRNE training, and the command's inspector general is including it in inspections of wings' readiness exercises, such as Mobility Guardian.

As AMC learned to operate during the pandemic, in some cases through trial and error, it got real-world experience with the kind of skills that might need to be used in a war involving chemical or biological weapons, he said.

"It's informed us very well as to how we need to conduct, at least a baseline to start from, depending on the nature of the threat that we're up against," Robinson said.

One example of how AMC adjusted to keep operating during the pandemic came from learning how to safely transport people who had contracted COVID-19.

At first, AMC brought the old Transportation Isolation System, used during the Ebola crisis of 2014, out of storage. But AMC found that system, which was designed to stop the transmission of fluid-borne pathogens, wasn't well-suited for transporting COVID patients. With medical personnel going inside the isolation system with patients during long flights, it was less effective at preventing airborne transmission of COVID.

Robinson said AMC originally mitigated the risk of COVID exposure by having medical personnel wear MOPP gear as personal protective equipment. But that wasn't sustainable. With ocean-spanning flights often taking nine or 10 hours, and no antechamber to make it easier to exit or enter the isolation chamber cleanly, the medical personnel ran the risk of dehydration, he explained.

So within 90 days, TRANSCOM created a new system, the Negatively Pressurized Conex, designed to limit airborne pathogen transmission. It has since been used to transport about 330 suspected COVID patients.

The COVID crisis also taught AMC how important it is to track and measure the readiness of its medical crew force, and to keep vital medical equipment maintained and ready for when an emergency erupts. Once the Ebola crisis passed, AMC put its isolation chambers in storage and "weren't really looking after it the way we should have," Robinson said.

AMC won't make that mistake again, he added. After the COVID crisis passes, when AMC no longer needs to use equipment and capabilities such as its new isolation chambers, it will make sure they are kept in good working order -- for the next time they're needed.